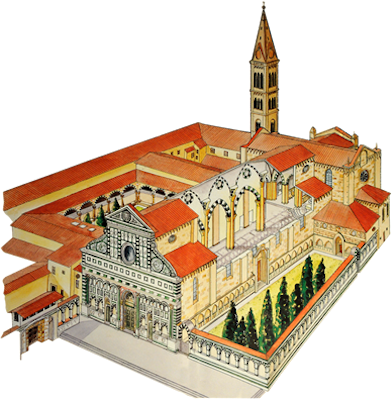 A BIT OF HISTORY

Basilica of Santa Maria Novella was founded by the monks of Dominican Order in the first half of the thirteenth century, becoming one of the most important points of religious and artistic interest in Italy. The celebrity of Santa Maria Novella during the Middle Ages and Renaissance period attracted important artists such as Giotto, Brunelleschi, Masaccio, Michelangelo, Ghirlandaio, Botticelli and Vasari (just name a few), who realized beautiful artworks inside the complex.

This particular artistic and religious fortune bound for ever the place to its artworks. These masterpieces have been intentionally conceived for this complex.

Since 1868, following the Laws of Suppression of Church property and on the basis of the subsequent 3 September Convention between the City of Florence and the Rector of Churches, the Community of the Dominican Fathers has held responsibility for the maintenance and all officiating duties of the Church buildings, including the liturgical and pastoral services, of the Basilica of Santa Maria Novella.

In 2001, following extensive restoration work to the Basilica of Santa Maria Novella, funded entirely by the Italian State for the grand 2000 Jubilee, the non-profit association Opera per Santa Maria Novella was founded on the the initiative of the monastery's Dominican Community.

From its establishment the Opera agreed a Convention for the management and upgrading of the Santa Maria Novella complex’s heritage with the aim of improving the physical conservation of the artistic treasures kept there, cultural promotion and its maintenance as a place of worship.

On 24 December 2008, the Intern Ministry Fund for Places of Worship revoked the Basilica’s use by the City of Florence granting free use of the sacristy and crypt, with restricted control, as well as furnishings, bibliographic, archival and archaeological contents therein, to the Provincia Romana dei Frati Predicatori (‘Roman Province of the Friars Preachers’), the Dominicans.

Thanks to an agreement between the Interior Ministry's Religious Buildings Fund and the Municipality of Florence, as of 10 November 2012 the monumental complex of Santa Maria Novella can be visited with a single ticket admitting the public to both theBasilica and the Cloisters. Visitors will thus be able to admire the entire complex without interruption, rediscovering the intrinsic unity of this extremely ancient Dominican convent.

The tour includes both the municipally-owned Museum of Santa Maria Novella (Cloister of the Dead, Green Cloister, Spanish Chapel, Ubriachi Chapel and Refectory) and the part of the complex managed by the Opera per Santa Maria Novella (Basilica and Cemetery of the "Avelli").

Bearing this in mind, the Church remains principally a house of prayer and for that reason continues to guarantee free access to the Cappella della Pura (‘The Pura Chapel’) for worship and prayer. Tourist visits to the Basilica are limited on the basis of liturgical services and by the requirements of pastoral work. 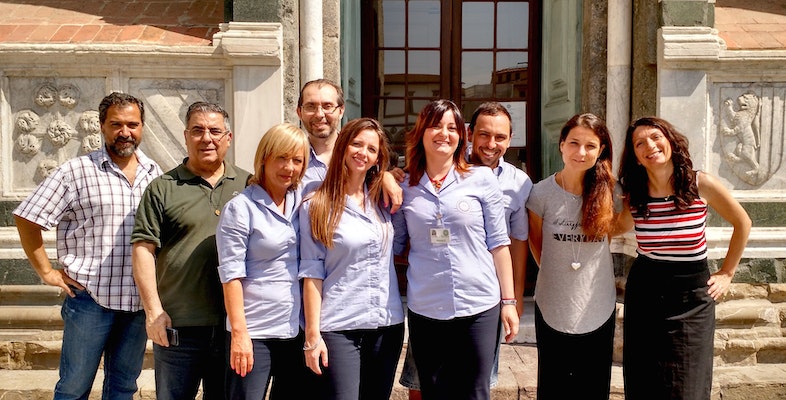 COORDINATE BOTH MUSEUM AND RELIGIOUS ACTIVITY AT SANTA MARIA NOVELLA

The complex of Santa Maria Novella, by its nature is either a religious and a museum site. It has currently a new form that seeks to harmonize both the functions.

Opera for Santa Maria Novella is responsible for reconciling the needs of both pilgrims and visitors even welcoming them at different times.

During the religious service the access to the complex it is free, although the tourist visit is not permitted at this particular time.

On the other hand during visiting hours the Basilica fully discloses its treasures. All chapels, cloisters and the locals are fully accessible.

To maintain and preserve the order, restoration, cleaning, surveillance and the reception of the complex is required a modest entrance fee. Revenues arising from ticket sales are mainly used to cover the high costs of maintenance of the place (especially the conservation of works of art and architecture).

Your contribution supports the preservation and enjoyment of our rich cultural heritage for future generations while preserving an important piece of artistic and religious history of national and international relevance.

The maintenance and security of this extraordinary historical-artistic monument requires the presence of a dedicated staff who is working everyday to improve the protection and enjoyment of this place. These people are committed to surveille the premises and to welcome pilgrims and visitors once they access to the Basilica. Their presence is necessary to maintain the place up to the required standards. Ask to these people all the information you may consider useful and they will address you in the right direction.

The organization of the activities within the complex Santa Maria Novella requires constant work by a wide-ranged team that operates both in the administrative and in the communication sector. This work is necessary to coordinate and spread the many events taking place in the complex and ensure that visitors and faithfuls experience always lives up with their expectations.

Santa Maria Novella is a very large complex that needs a constant and extraordinary maintenance. A team of electricians, carpenters and architects is always ready to intervene and to ensure the preservation of the site or the safety of visitors and staff. The structure and its artworks, along with the accessibility to the complex are therefore under the direct monitoring of these professionals.

The priceless works that are present in Santa Maria Novella are under constant monitoring of the Superintendent, the institutions and dozens of professional restorers. All artworks are checked periodically and maintained thanks to cutting-edge restoration techniques. If you enter the basilica you can see the result of these patient “angels” restorers who work “behind the scenes” of a wonderful stage. These technicians are keen not only to restore the artworks with the best (and not invasive) solutions but also to research and replace ancient techniques using the same mixtures of the time for a true philological reconstruction. Opera for Santa Maria Novella is thanking you for your support and commitment to these expensive initiatives.